The Iliad of Homer 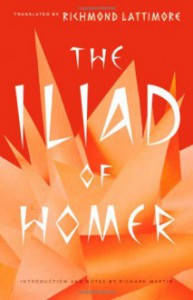 The cover of this book looks like Jewels: A Secret History if you're not paying attention. Which I often wasn't, so I kept grabbing this book when I wanted that one.

I spent way too long deciding which translation I would read of The Iliad. Basically just decide if you want prose or poetry and then pick one. I don't think it really matters.* Maybe check the footnotes if you're not reading this as part of a class. But it's probably best read in a class with a professor who knows way more about Homer than I do. Then they could explain Book 23 to me... seriously the whole time I was reading it I was like, I don't understand the Greeks. What is this?

I will say that the word nipple showed up way more than I expected, and some of the big events I was expecting were glossed over very quickly (basically anything to do with women). I found all the parts where the women were included (goddesses or mortals) to be the most interesting, and I can't believe that's where the poem ends.

I was planning on reading the Odyssey immediately after this, but then I needed a break so that will have to wait until later. I'm going to read the Fitzgerald translation most likely, in case anyone was wondering. But I might go with Fagles because I think that edition has better footnotes. We'll see what's available from the library at the time.

*Although I did read part of Pope's translation, and I couldn't do 24 books of that. Very impressive to think he did the whole thing though.