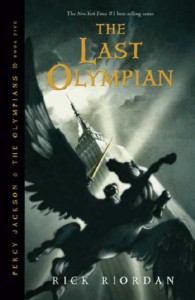 Overall this was a satisfying end to the series. There's so much action, and it's so good. The series isn't perfect by any means, but it was definitely worth the reread.

The rest of this post is just a list of rambling notes/questions/observations so it's all going under a cut.

Potential spoilers for all Percy Jackson books from TheLightning Thief to The Last Olympian here.

Pegasus masculinity is pretty fragile if having your mane braided like "My Little Pony" is comparable to being in a life-or-death situation.

chink in armor: Riordan uses this phrase a few times, and I know it's unrelated to the racial slur, but people will use it in racist ways (see Jeremy Lin and chink in the armor) and it's another phrase I'd like to see die.

Dead Bro Walking: Riordan tries to spin Beckendorf's death as not the first in the war, and while that's technically true, and he does get a hero's sendoff, he's still the first person to die in this book and one of the only (if not the only?) black kid in the series.

I was really hoping the pizza delivery boy and Sally's first meeting of Mrs O'Leary would be in The Demigod Files but they weren't. Maybe they'll show up somewhere else. It's cruel to reference such things and never tell the stories.

Why is Rachel wearing a kimono? Just say robe.

I remember the cellphone vs demigods being a surprise. Not in this book but whenever it first shows up. It kind of feels like an afterthought idea. Like maybe someone read the books and was like, "Why don't the kids just call on a cellphone?" and Rick Riordan was like, "Why don't they just use cell phones? Better put something about that in the next book."

There are just general continuity questions I have throughout this series. And times the writing makes me pause and go back a few pages just to see if I missed something. Like when Annabeth gets picked up by her armor, off the bridge but she was last described as not wearing armor and she's never described as putting armor on.

Sliena as the spy didn't quite make sense to me, especially since she's away from Manhattan for such a long time trying to rally the Ares campers to the fight. I guess you could say Kronos is operating on old information when prepping for his second attack since the Ares cabin has been out of the fight since the beginning of the book.

I don't know how believable it is that Silena tricked the Ares cabin into thinking she was Clarisse. Now knowing about charmspeak, maybe some combination of persuasiveness from Silena plus a desire to fight from the Ares cabin makes it possible. Like they wanted to go to the fight so they let themselves be tricked. It's nice as an Iliad homage, but it doesn't quite make sense in the story.