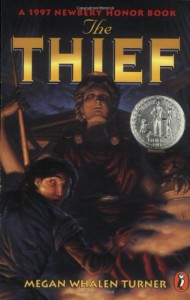 There are several books in my life that I love but am always afraid to reread. Because there's no way they're actually as good as I remember. But I'm always wrong (thank goodness).

It's difficult to talk about this book. I don't want to spoil anything for anyone, so I'll just say The Thief is a great book. It takes a little bit of time to get into it, but then it's so hard to put down. I reread it in one day this time. Seriously. So. Good.

Below the read more is just a memory from around the first time I read The Thief. It's probably not terribly interesting to anyone but me. Hence the read more.

In my geography class (yes, I had to take geography as a high school freshman) for some reason we had to read a book and then draw some geographically significant place form the book. I wanted to do mine based on The Thief, but my teacher thumbed through it and said it was too juvenile.

As a result I said I'd do mine on White Fang. I think he gave us a list of suggested titles and I just picked one because I didn't care at that point. I was mad I couldn't use this book because there's so much freaking geography in it that it would have made a great project. In the end I didn't read White Fang (still haven't), and I half-assed the project (I have a vague memory of drawing a cave under a tree maybe?).

If I had used The Thief and if I had attempted to draw a map of the countries, mine would have been entirely backwards because in my mind Sounis is in the east... I don't know. I'm not great at fictional geography. Thank goodness there's finally a map in all the new editions.